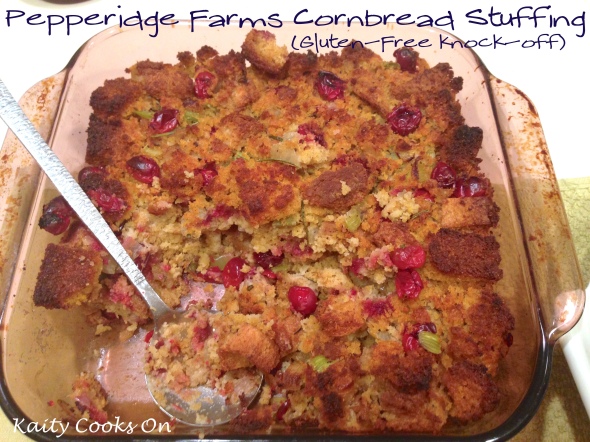 This year’s Thanksgiving was wonderful.  We had unexpected visits from a few of my friends from high school.  Their presence was very much appreciated, as we had more than enough food for six people, let alone the four that we had initially planned on.  Everything went off without a hitch.  That entire table you see is gluten-free (excluding the stuffing in the metal bowl on the bottom right).  It was such a relief to know that I wouldn’t be paying for such delicious food in a few hours. 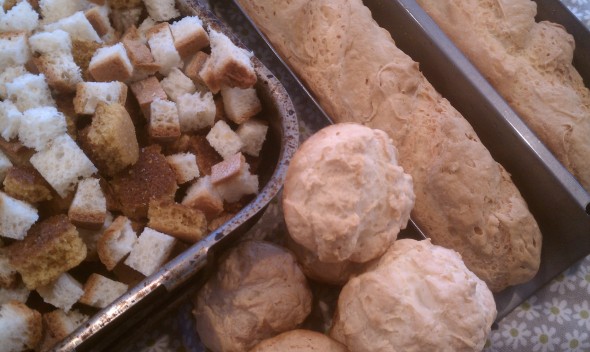 My Pepperidge Farms knockoff homemade gluten-free stuffing was perfect!  In fact, it won over my mother: we can use my (entirely gluten-free) next year, inside the bird.  So next year’s holiday really will be completely free of gluten.

My stuffing is in the center, behind the bottle of red wine.  As I mentioned, I used Nicole Hunn’s Old Fashioned Cornbread recipe (which is naturally gf!), baked thin, as a base.  I also added about half a loaf of Udi’s white bread.  I chopped both breads into small cubes, and let them sit uncovered on the counter fr three days to dry out.  The afternoon before Thanksgiving, I placed the bread cubes on a baking sheet in a 150 degrees F oven for 3 hours, stirring occasionally.  You want the bread to be very dry.

On the morning of Thanksgiving, place the bread cubes into a large mixing bowl.  Add 1 Tbsp of the melted butter to a medium saucepan over medium heat, then add your chopped onion and celery.  Sauté vegetables until they begin to soften and turn translucent.  Pour remaining melted butter over bread along with cooked vegetables.  Stir to incorporate.  Return saucepan to heat, add in chicken stock and all spices.  Cook for about 10 minutes,  until broth is hot and spices are fragrant.  Slowly pour broth over bread cubes, mixing constantly.  Once all broth is soaked in, loosely stuff mixture into Turkey cavity for proper stuffing.  Cook turkey according to package directions for “stuffed bird”.  Or spoon mixture into baking dish or crockpot for dressing.  In baking dish, cook dressing for 30 minutes at 350 degrees F.  In crockpot, cook dressing on low for 4-6 hours.  If able, baste dressing periodically through cook time with drippings from turkey pan.

*Use the greater amount of broth if you are cooking the mixture outside of the bird, as a dressing, or if you prefer a very wet dressing.  Stuffing will absorb some juices from the turkey, and needs a little less broth initially. 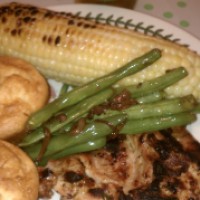 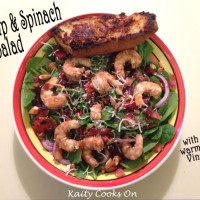